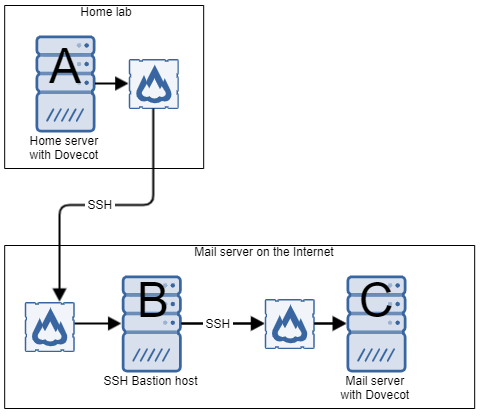 This is just a short post about how to do  Dovecot Maildir backup using the command doveadm backup initiated from your home server that is not on the Internet, to your Internet facing mail server using SSH as a secure transport medium.

The post is not based on any linux distribution and can be used without any modifications as long as you have access to bash. My particular config is based on Ubuntu 20.04 and Centos 8 in my home lab.

The servers have been named host-A, host-B and host-C to better understand the configuration used.

I have installed Dovecot with a similar config as my Internet facing installation so that all email accounts can be backed up in a safe manner. The home lab is behind NAT and a firewall and is not accessible from the Internet by choice.

The Dovecot mail server on the Internet is placed behind a reverse proxy (HAproxy) in a secure manner and is not accessible directly from the Internet. SSH access directly to the mail server is not allowed, but you can access it by SSH jumping through the Bastion host. To make this as simple and automated as possible I have modified my .ssh/config file with the needed configuration to allow doveadm access the Dovecot server without any problems.

To allow my home lab server (host-A) access the Bastion host (host-B) over SSH I have created a custom .ssh/config file with SSH-keys. Config of SSH-keys is not being described here.

And if everything is working as expected you are now logged into the mail server over SSH.
This was made possible by the ProxyJump directive in .ssh/config file defined on host-A.

The doveadm command is versatile and can be used to perform many tasks, but I am planning it to solve my Dovecot Maildir backup needs. doveadm backup performs one-way synchronization. If there are any changes in the destination they will be deleted, so the destination will look exactly like the source.

You can also use doveadm sync to performs two-way synchronization. It merges all changes without losing anything. Both the mailboxes will end up looking identical after the synchronization is finished.

We are now ready to do the actual backup of Dovecot using the doveadm backup command. Usually the doveadm command is being run from the source and towards the target host, but in my case I reverse it because my home lab is not accessible from the Internet.

Similarily you will see the following three processes on the target host, host-A in my home lab

To automate things and backup all user emails I use a simple bash script to query Dovecot about all users and perform backup of all accounts, one by one using doveadm backup over SSH.

The script to backup mail from all users accounts

If you do not have the same mailbox format in both ends, you can perform a conversion from the source to the target. I am using Maildir on both servers so a conversion is not necessary.

The doveadm backup command can be a little bit tricky if you abort the initial sync of email accounts before it finishes. If this happens you just delete the target directory and start the backup operation again.
To keep your backup updated regularly create a cron job with your doveadm backup command and you are all set.